Back From The Future – Who Am I? 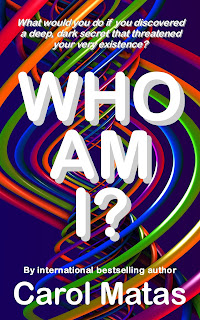 How do you update a science fiction novel?

When I wrote Cloning Miranda, The Second Clone and The Dark Clone in the late 1990s and early 2000s, they were set in the near future.

When Fictive Press agreed to republish them as one novel and bring them out for the first time in the U.S. this fall, I thought I should update them – at least in terms of cell phones and social media. But once I started to do that I realized that the science of cloning had also advanced over the last decade. And so a small little edit suddenly became an entire revision. And in order to make the book really up to date, I set in the the present. Yes, that's right. Because the present is, in fact, where all the cutting edge cloning work is happening – especially where gene splicing is concerned.

So can we still call this book science fiction? I think so. As far as I know there are no human clones. But there is already a huge market cloning pets that have died. Sadly, our dog died in December. It would never occur to me to clone her even if could afford the $100,000 bill! (And even if I could afford that, I'd rather give the money to charity.) No one could ever replace her.

But the book isn't about cloning, really. It's about what makes us human. And when I read science fiction, that's what really interests me. It's why I'm a proud Trekkie!!
at 6:05:00 PM No comments:

Translated into 15 languages, over 100 awards and honours