Cloning Miranda
A Suspenseful Sci-Fi Thriller for YA & Middle Grades 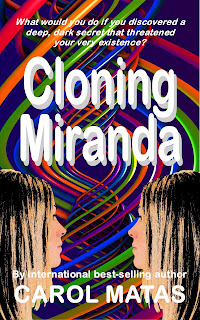 Available in ebook, Kindle and print.

Fourteen-year-old Miranda has it all: beauty, brains, talent, perfect health. Until the day her vision goes blurry – the first symptom of a fatal disease. As she and her parents fight to save her, she makes the shocking discovery that everything she thought she knew about her life is a lie.

Suddenly Miranda is facing some troubling questions: What makes us human? Is it our DNA, our upbringing or the choices we make? The answers will force Miranda to deal with the biggest challenges of her life.

"A suspense-filled mystery that starts off with exploring Miranda’s middle school life, then morphs into a science fiction bombshell!”— Erika Lewis, TV producer/writer and author of Game Of Shadows, Tor Books

“Full of twists and turns that will leave you guessing and gasping until the end!” — Eric Walters, award-winning author of over 100 books for children

“A carefully crafted and suspenseful tale, as thought provoking, as it is engaging.”— Perry Nodelman, children’s book author and recipient of the 2015 International Brothers Grimm Award for research in children’s literature
Originally published as three titles by Scholastic Canada: Cloning Miranda, 1999, The Second Clone, 2001, The Dark Clone, 2005. New revised edition published by Fictive Press, 2016.
𐩘
The Edge of When 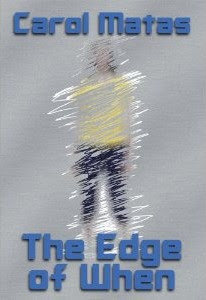 Rebecca worries about the things a normal 12-year-old girl would worry about: starting junior high, her friends, her family. But when she witnesses a kidnapping and finds herself transported into a terrifying world of the future, Rebecca not only must find her way home - she must figure out a way to alter the course of history.

Originally published as three separate stories — The Fusion Factor (republished in the U.S. as It's Up to Us), Zanu and Me, Myself and I —  this newly revised and edited novel for young readers still resonates with one essential truth: the future of the world is shaped by the choices we all make today.
"...Rising junior-high-schooler Rebecca witnesses the kidnapping of a classmate and while trying to help him, is transported by time machine to 2050, a dystopian, post–nuclear-apocalypse future in which the few survivors live underground. Damaged by radiation, they have resorted to kidnapping young teens from the past to provide for future reproduction. In a fast-paced series of often-suspenseful events, the pair return to their own time accompanied by teens Lewis and Catherine. In a second part, Rebecca follows time-travelers Mark and Jonathan to a different dystopian future, a commerce-driven police state in which the pair are freedom fighters. Eventually, Rebecca ends up in her own time living side by side with another version of herself as she and her friends try to change the present in order to alter the future. The action and imaginative ideas will keep readers engaged... A thought-provoking and entertaining time-travel tale with a useful, even hopeful, message about personal responsibility" — Kirkus Reviews, 2012
Published in by Fitzhenry & Whiteside, 2011.
𐩘
My Myself and I

Have you ever wondered what would happen if there were two of you?
In Me, Myself and I, Jonathan meets the girl from his dreams, but he can't figure out how she got there.

Rebecca returns from Zanu to a great surprise. In this adventure she has to outsmart herself.
Published by: Fifth House (Saskatoon) and General Paperbacks (US), 1987. Reissued by Stoddard: Toronto, 1991; Paris: Pocket, 1997; Spain: Ediciones S.M., 1998.
𐩘
Zanu

Rebecca has already had one experience with a time machine and travelling into the future. Can there be another future? In the world of Zanu, Rebecca finds kids her own age buying beautiful clothes and cars and telling their robots what to prepare for dinner. But something doesn't tell right. Rebecca wants to go home, to her own time, but she finds herself caught in this glamorous dreamworld. Is it real? It is all beautiful? Is it our future?
Published by: Fifth House (Saskatoon) and General Paperbacks (US), 1986. Reissued by Stoddard. Toronto, 1991; Pocket, Paris 1997; Ediciones S.M., Spain 1998.
𐩘
The Fusion Factor

It's all Lonney's fault that Rebecca gets a D on her report. Lonney is always causing trouble. But when Rebecca sees Lonney get kidnapped and no one believes her, she has to do something. Following the black van takes her to a warehouse and then. . .

"We believe The Fusion Factor to be just the type of children's literature needed to facilitate discussion of the nuclear threat in classrooms and schools by teachers. We believe children will find the book not only captivating but also stimulating, informative, and encouraging." — Manitoba Educators for Social Responsibility

Published by Fifth House (Saskatoon) and as It's Up to Us, General Paperbacks (US), 1986. In Danish as Den Sorte Varevogn, Copenhagen: Forum, 1988. French Publication, Paris: Pocket, 1997. Spanish Edition, Spain: Ediciones S.M., 1998.
𐩘
The DNA Dimension

Rebecca, David, Beth, and nasty Norman are playing in the snow near Winnipeg, Manitoba. Suddenly, Beth disappears. One by one, the children fall through…what? They find themselves in a totally different world–a terrifying world–a world of programmed people and genetic manipulation.

This exciting science fiction adventure will fascinate the reader as a story. It will also provoke thought and discussion as it introduces problems that face the scientific world today.
Published by Gage Publishing, 1982.