Debbie's life is about to change forever–her grandmother passes away suddenly, her parents decide to move and she has to leave her school and her best friend to live in a city and a community she know nothing about.

But, just when things begin to settle down and Debbie starts to accept the ways of her new religious school and a group of girls immediately make her feel so welcomed, Debbie begins to feel funny about the amount of attention she gets from her teacher, Rabbi Werner.

In The Primrose Path, Carol Matas explores the dark side of a charismatic leader through the eyes of Debbie, a young teenager coming of age during an important time in her life.
Published by Bain & Cox, 1995.
𐩘
Telling 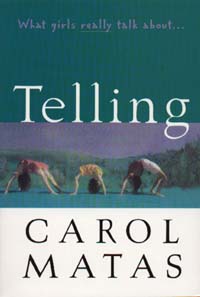 No matter what else is happening in their lives, no matter how mad at each other they might be, the Erikson sisters' late-night tell-alls are their one surefire way to keep themselves honest. And lately, being honest hasn't been easy.

This novel chronicles one eventful summer in the three sisters' lives, one of challenges for them all. Thirteen-year-old Corey, the youngest, is swayed by her reckless groups of friends into taking some big and dangerous risks. Sue, the eldest, is in love with her new boyfriend, but how much does she have to compromise to keep him? For middle child Alex, who's landed her first job in a Renaissance Fair, the challenge is to figure out how to stand up for what she believes, when doing so means going against the wishes and expectations of others.

Absorbing, full of surprises, Telling is, at its unique heart, about the power of "girl talk" to overcome fear, articulate beliefs and transform lives. 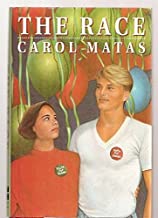 Ali Green's mother is running for leadership of the Liberal Party, and Ali, a junior delegate, accompanies her to the convention in Calgary. She wants her mom to win, of course. But if she does win, then it means they'll have to move to Ottawa–away from Ali's friends and school. Complicating matters even further is Ali's interest in Paul James, who just happens to be the son of her mom's strongest political rival! And when the two of them overhear what they're not suppose to, Ali's whole world turns completely upside down.

Set against the tumultuous excitement of a political convention, The Race explores politics, loyalty, right and wrong, and where they all fit in one young girl's life.
Published by Harper Collins, 1991.