Book Launch Over, Now Onto the Next One

Just back from the launch of Behind Enemy Lines. The place was packed and everyone said the reading went well. (Thanks to 2 years of Drama school in London, England.) Now I need to get back to the Holocaust book I'm writing for Scholastic Canada. Deadline looming. Nearing the end and everything else feels like a distraction. Onward.
at 9:43:00 PM No comments:

CBC and my new book

CBC has done a lovely piece on my new book, Behind Enemy Lines
http://www.cbc.ca/manitoba/scene/books/2012/03/15/carol-matas/
The launch is tonight and I'm really looking forward to it. I'm hoping to meet, in person, some of the veterans who helped me get my facts right!
at 1:42:00 PM No comments:

Praise for Behind Enemy Lines

"The narrative voice is potent and realistic, and Carol Matas does a marvelous job capturing both the hope and courage in Sam’s personality as well as the terror he feels as he is transported around Nazi occupied territory against his will ... the truth of his situation is never overwrought with heavy-handed factuality or didacticism. Behind Enemy Lines is a fantastic account of one Canadian’s struggles through World War II in occupied France." — Bob Bittner, CM, Volume XVIII Number 23, Feb. 17, 2012. Read the full review.

"What starts as a rip-roaring adventure soon becomes a sobering account of strength in the face of adversity that encompasses the workings of the French Resistance and illuminates the Holocaust from a fresh angle ... the subject matter is difficult but ultimately uplifting." — Elaine Kalman Naves, The Gazette (Montreal) Feb. 17, 2012.

Eighteen-year-old Sam Frederiksen has come a long way from the Prairies. Trained to be a gunner in a Lancaster bomber during WWII, he is shot down over France. Surviving the crash, he joins forces with the French Resistance...only to be betrayed by one of its members. He and other flyers are rounded up by the Gestapo and held in Fresnes prison.
Treated as spies, rather than POWs, these men are beaten — then sent to Buchenwald Concentration Camp in Germany. It is here that Sam witnesses the darkest side of humanity — gas chambers, torture and starvation. Yet it is also here that he comes to understand the true resilience and unfathomable courage of the victims.
Behind Enemy Lines is partially based on a true incident from WWII, in which 168 Allied airmen were captured and sent to Buchenwald. Twenty-six of these men were Canadian.

Nice Review for Edge of When

Kirkus Reviews just called Edge of When "a thought-provoking and entertaining time-travel tale with a hopeful, message about personal responsibility."
at 4:32:00 PM No comments:

My New/Old Book: The Edge Of When 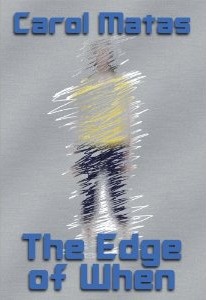 I wrote four science fiction books 30 years ago. I've rewritten and updated three of them: It's Up To Us, Zanu and Me, Myself and I. They warned of nuclear war, terrorism, corporate greed and a corporate takeover of the world—well...you get the drift. Sounds more like right now than the future. But I live in hope. We can still change the world for the better. Yes, that includes getting involved in politics—because if we don't, those who do will make all the big decisions for us?


It was a fascinating exercise rewriting three books from so long ago. What to keep? What to drop? My editor Christie Harkin was a great help. She was able to look at all three books with fresh eyes and suggest entire chapters and story lines that just weren't necessary once I was melding all three books together.
I'm really happy with the old/new book. I hope it will give readers lots to think about. And perhaps even propel them into action in politics, the environment, progressive causes that can make our world a better place for everyone, not just a playground for a privileged—or fanatic—few.

The Edge of When has just been released and can be purchased online...

Email ThisBlogThis!Share to TwitterShare to FacebookShare to Pinterest
Labels: The Edge Of When by Carol Matas

If you agree that being psychic is a possibility, then the next question is: what does that mean? Is the future fixed? Do we have free will? If we have free will how free is it when some people can see the future? Is it only a possible future?

These are just a few of the questions I asked myself when I started to write The Freak series, Tales of a Reluctant Psychic. I was also interested in investigating what it would be like to suddenly have your life changed. One minute everything is set, you have a plan. The next minute it's all been turned upside down and you have to start over — even with the way you think.

On Tuesday, Nov. 3/09, we launch Tales of a Reluctant Psychic at McNally Robinson bookstore in Winnipeg. I predict it will be a lot of fun!
at 7:20:00 PM No comments: