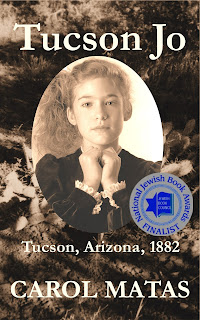 Tucson Jo is a book written for this very moment. I encourage parents and teachers to introduce it to the young people around them. This middle grade novel is about an election. In this election a populist runs for mayor of Tucson, Arizona, in 1882. His opponent is a Jewish man who believes in the rule of law. Guns are used to intimidate. So is Antisemitism. Jo is the eldest daughter of the Jewish family—and all she wants is freedom, freedom to wear pants, for instance! But even Jo is fooled by her father's populist opponent, believing anarchy will mean freedom. But anarchy is not freedom and she soon discovers that. What is true freedom? An important question to ask, fundamental to our democracy.

With elections coming up in the United States, in 2020, I will be available for school/ Skype visits  to discuss civics, gun violence, feminism, and the importance of politics and voting in our lives.
Tucson Jo was a National Jewish Book Awards Finalist.